How infections spread and how to stop them

Infectious diseases are different from other diseases in that they are caused by microorganisms that spread from one individual to another, sometimes passing through other humans, animals, or an environmental reservoir. While infectious diseases spread wherever and whenever they are able to, several situations increase the risk that infections as well as antibiotic resistance spread. To understand why and how some people are more vulnerable, we need to understand how infections are transmitted.

Most transmission routes of infections can be classified into three major categories: fecal-oral, contact and aerosols.

The fecal-oral route is essentially what it sounds like – bacteria from feces are transported from the feces of one individual to the mouth of another. In the simplest form, a person goes to the toilet, does not wash hands properly and prepares a delicious meal for the family or a guest. Bacteria caught in the hands during the toilet visit are transmitted to the food and are eaten by the others, resulting in disease. Examples of diseases that can spread like this are food-borne and water-borne infections like typhoid fever and salmonellosis.

Contact transmission occurs through physical contact either directly with an infected individual or indirectly via a contaminated surface. For example a health care worker that cares for one patient and then moves to another without washing hands or changing protective barriers, and thus transferring bacteria from one patient to another. Other examples of contact transmission are sexually transmitted infections and most wound infections.

Aerosols are a common route for transmission of respiratory tract infections. Typically, a patient with a cold or influenza would cough and sneeze, causing a cloud of small droplets carrying the pathogen, in this case a virus. The droplets can then be inhaled by a nearby individual that becomes infected. Bacterial diseases spreading through airborne droplets include meningitis, streptococcal infections and tuberculosis.

The One Health perspective

Infections are not only transmitted from human to human. Sometimes, humans transmit diseases to animals and animals transmit diseases to humans. In many cases, the link may be obscured as transmission happens via the environment or a carrier. As an example, animal feces may be spread on fields as manure without proper treatment that would kill disease-causing bacteria. The bacteria then contaminate the crop and end up in the food humans eat (a fecal-oral transmission). Similarly, both human and animal feces may contaminate water sources used for irrigation or drinking water, spreading diseases like typhoid or cholera. In other cases, a farm worker may transfer a disease-causing bacterium from animal to animal, effectively acting as a bridge between herds or even farms if hygiene and biosecurity are not maintained.

Groups and populations that are especially vulnerable to infectious diseases include people living in poverty or being affected by armed conflict. A partial reason can be found in the nutritional status of the people affected as food supply is scarce, making them more susceptible to contract infections. But the nutritional status and following weakened immune system is not a sufficient explanation. Other important contributors are for example crowded living conditions in poor areas and refugee camps, and lack of functioning water and sanitation infrastructures. Both these factors increase transmission of infections through the routes describes above. 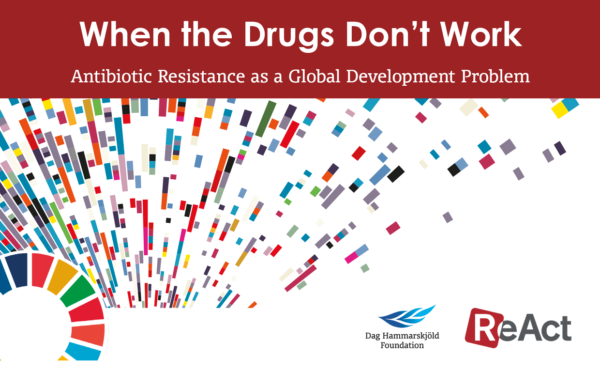 In order to prevent transmission of infections, one measure stands out as the most effective for most infections and transmission pathways: water, sanitation and hygiene (WASH). The WASH concept includes access to safe and clean drinking water, adequate sanitation services (including waste treatment) and hygiene measures like handwashing both at home and in health-care and farming. These measures are even more critical to take among those most vulnerable and to reduce the spread of antibiotic resistance.